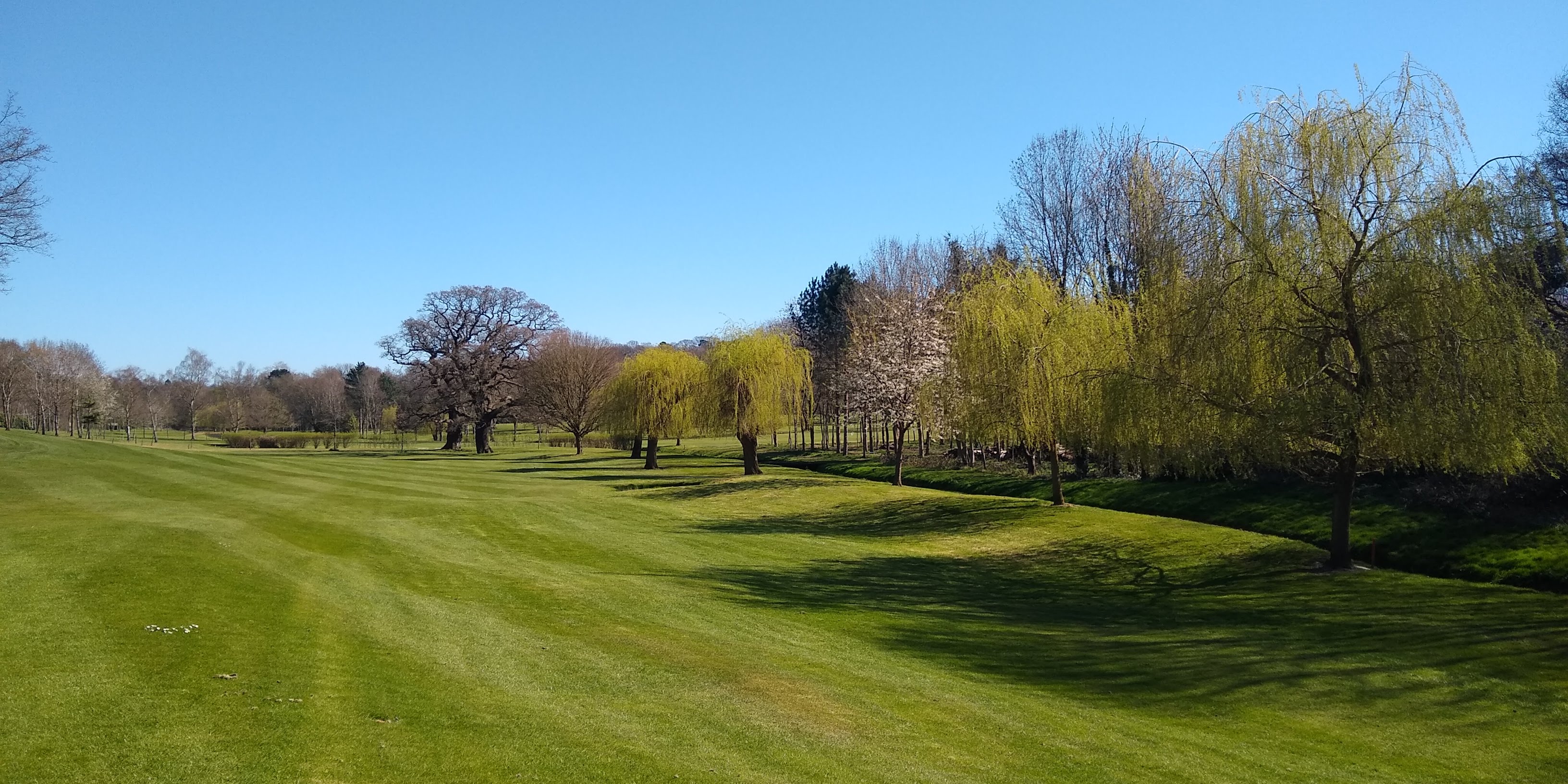 It was the first truly warm day of spring and the fourteenth day since the beginning of the coronavirus lockdown. For my government-mandated exercise I had been exploring by bicycle the Quaggy River, after which my housing co-operative is named. There was no particular reason to do this except for the arbitrary name of the co-op and that it’s good to have goals. I had already been to the Quaggy at Manor House Gardens, Manor Park, Sutcliffe Park, and the Old Elthamians Rugby club, and now it was time to do what I had imagined as the big one. I would cycle to Sundridge Park to see the Quaggy in its largest green space.

The day was so good I applied suncream to my face and neck before setting off. Spring was in the very process of springing: cherry flowers had been dripping from the branches for a week and just the day before, the poplars and willows had all of a sudden pushed out lime-green leaves. It was with a feeling of wellbeing then that I began my cycle along the Ravensbourne River from Deptford Bridge (for those who don’t know South London river systems, the Quaggy flows into the Ravensbourne, which joins the Thames at Deptford Creek). Dodging the walkers and other cyclists, leaving two metres whenever possible and feeling slightly guilty when I couldn’t, I powered through Lewisham and out the other side to pick up the Quaggy for the first time at Manor Park. It was just a flash of river and then back to roads for fifteen minutes until I rejoined the Quaggy at Chinbrook Meadows.

I cycled straight through the meadows and onwards to the edge of Sundridge Park, there to get a nasty shock. Instead of the entrance to the park I had been expecting, I encountered a fence and was forced to cycle up a narrow footpath beside the park. It was a golf course on the other side, which I had known would be part of the green space, having seen it marked on the map. But what I had not expected, and what I discovered as I continued to cycle around the fence, was that Sundridge Park, as big as any park in South East London, was entirely private, with the golf course filling most of it. I had only seen the park on the map and just assumed it was a park that could be visited. It was, it turned out, a park in the sense of being the gardens of a stately home, not in the sense of being public space.

Golf courses strike me as a bad use of space at the best of times – and I mean this literally, not just as disapproval of the sport, for their effect on ecosystems is almost entirely negative – but seeing golf courses in urban environments has always filled me with the desire to tear down fences. This is a park larger than Greenwich Park. For those who know Beckenham Place Park, Sundridge Park is of a similar size, but given over almost entirely to golf. It claims to be ‘the closest 36-hole golf course to any major city in the world’. So much green space inaccessible to the public when they are living crowded around it is criminal. No doubt the original creation of the parkland in Norman times had been criminal too, but these are crimes committed by the right sort of criminal, so they are entrenched rather than punished.

I pushed on around the edge of the park until I found the entrance. It was open, though flanked by red notices declaring it to be private property and open only to those authorised to enter. This is not the type of sign I have any respect for, so I cycled inside, keeping a sharp eye out for security. None ever appeared. And as I went deeper in I realised I had come to Sundridge Park at the perfect time. Presumably it is usually beset by golfers and greenkeepers who would have strong views on the presence of a cyclist not dressed for golf. The virus had purged the golf course of such pests and it was largely empty, with just a handful of people out for walks. Whether these were club members or not I never knew, but no-one challenged me. With no-one within fifty metres of me, for the first time on the ride I pulled down the scarf I had been using to cover my mouth.

The map had made clear that through the centre of the park the Quaggy ran underground, and I quickly found where it disappeared into a tunnel. Above this the river wound its way across the golf course, flanked by willows, a pair of mature oak trees and a vast London plane tree. As I approached I saw that plastic drainage pipes emerged from the banks, doubtless carrying fertiliser and weedkiller from the golf course to pollute the river. But I was distracted from this by the idyllic view of rolling green grass and woodland, and then as I got to the river bank, by the shrill cries of three tiny ducklings paddling down the river. Then came a flash of anger again that this place, the most beautiful part of the Quaggy River, was inaccessible to the public.

I took photos, then sat on the bank to eat a snack bar, mildly in defiance of government regulations. But I couldn’t settle, thinking I might be thrown out at any minute. Before I left I wanted to find the other section of the Quaggy, so I climbed back on my bike. Then I saw just up the hill the big house. Sundridge Park Mansion, designed by architect to the rich John Nash, is big, impressive, neo-classical, and very white. After a succession of private owners it became a luxury hotel, then an upscale management training centre, and now, inevitably in these times, has been split into luxury apartments. A two bedroom apartment costs two and a half million pounds. Fire is free, yet mysteriously Londoners have not yet got angry enough to use it to adjust house prices.

I turned my back on the mansion and found my way along gravel tracks to the part of the golf course through which ran the downstream part of the Quaggy. There was a stone arch bridge here, meant to be picturesque but not particularly well executed, and then a series of plainer bridges stretching away into the distance where the golf course required them. Up the hill loomed the clubhouse, the sunshades on the terrace folded down.

It was time to head homeward. I wanted to shout to people as I passed that it was hideous that the river was hidden away here, that the most beautiful place for miles around was behind tall fences. But I suspected most people would see only the sanctity of private property. I pulled the scarf up over my mouth, put my head down and began cycling, comforting myself with the thought I had at least come at the right time. COVID-19 had opened Sundridge Park for a time and given me access to the Quaggy. I hoped that along with its trail of death and destruction the virus might bring us other unforeseen positives.