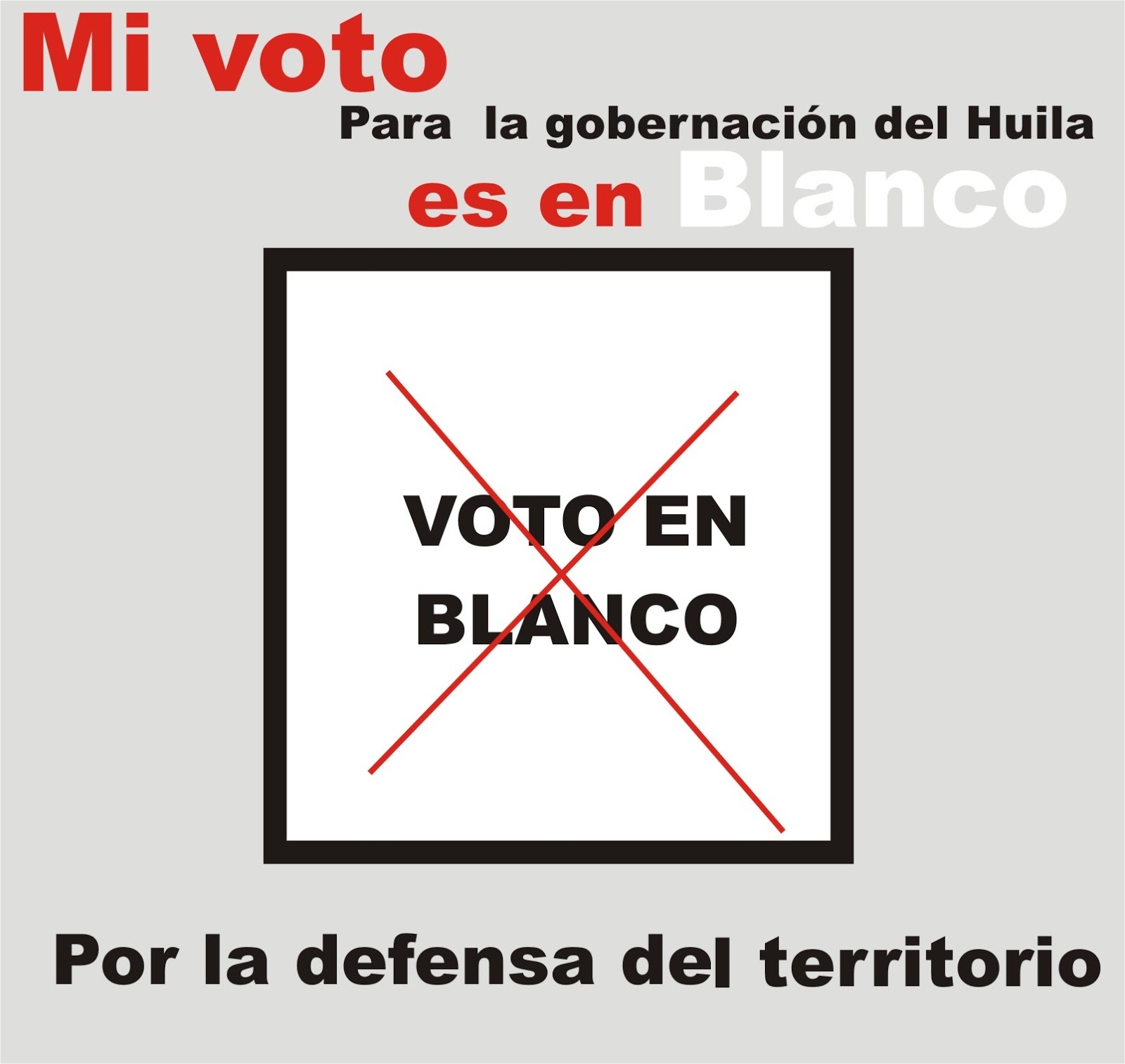 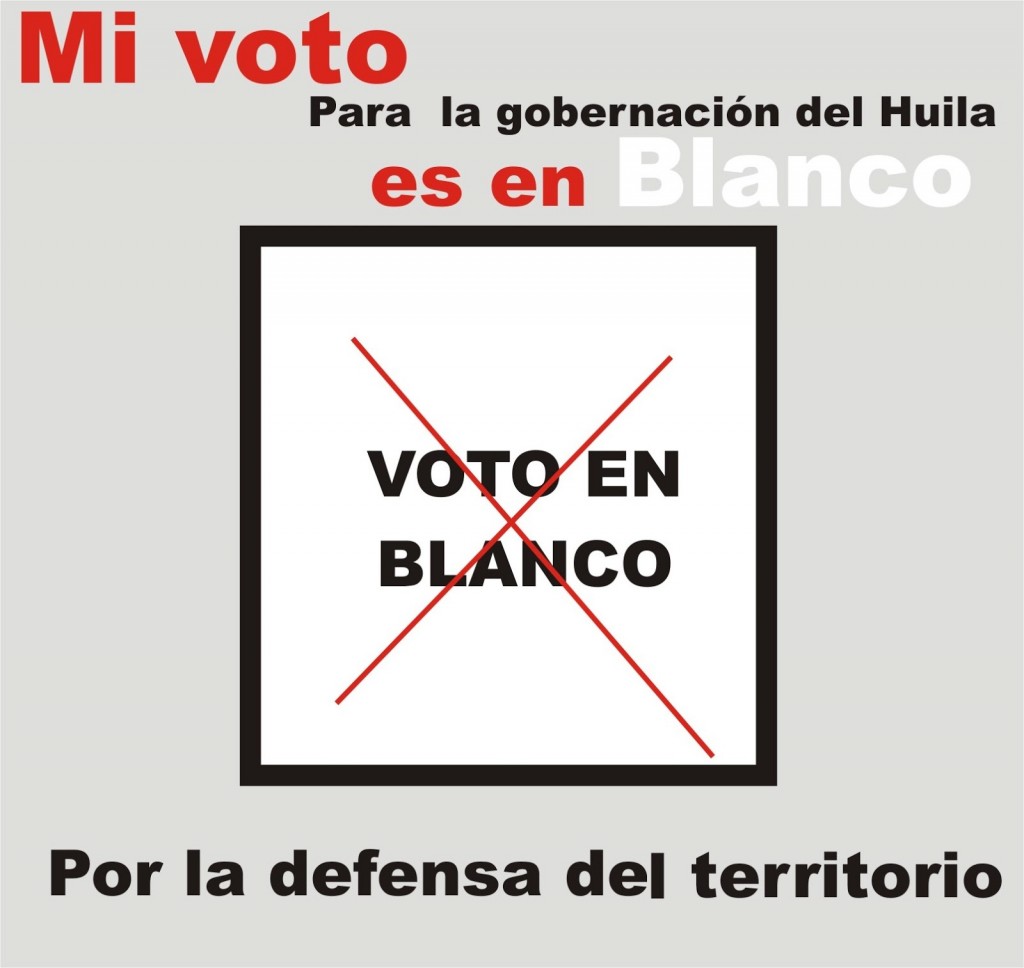 The government has ordered the posters of a popular campaign for “blank votes” against an Italian-built dam in south west Colombia to be torn down, leaving only one legal campaign for governor of Huila.

A gubernatorial campaign in Huila in which the main parties put forward a single joint candidate has been left looking even less democratic after the counter-campaign was declared illegal by the electoral regulator of Colombia.

In accordance with the ruling of the Consejo Nacional Electoral, the government of Huila on Thursday ordered local authorities and police to “Proceed with the removal, decommissioning and immediate suppression of all electoral propaganda in public spaces […] related to the campaign to vote blank in the election for governor of 14 April 2013.”

Blank votes are permitted under Colombia’s constitution and if a majority of votes cast are blank a new election is forced. The campaign to vote blank in the Huila election is being headed by ASOQUIMBO, a group against El Quimbo dam, a hydroelectric project being implemented by Italian company Emgesa.

Campaigners object to what they say was violent eviction of farmers in the area and say the dam will “affect irreparably the agricultural economy and the ecosystem of the centre of the Department, flooding 8,500 hectares.”

The anti-dam campaigners objected to the lack of choice in the election and the fact that the candidate, Carlos Mauricio Iriarte Barrios, is supportive of El Quimbo. They describe a blank vote as a vote “In defense of the territory.”

According to an ASOQUIMBO statement released yesterday, “A blank vote is the only way to confront the traditional clientelistic party alliance […] to delegitimize those responsible for the economic, social, environmental and cultural disaster caused by mining and megaprojects such as El Quimbo, oil exploration in the Páramo of Miraflores and the crisis in the agricultural sector.”

But the campaign has been declared illegal after the team of Iriarte, the sole candidate in a “Regional Unity” front, submitted a complaint that the campaigners did not register themselves with the electoral authority.

Registration would have submitted the campaigners to financial controls on their campaign, including spending limits, but ASOQUIMBO told Colombia Reports they wanted “to promote methods of citizen participation” that these controls would have made impossible.

They do not accept the ruling against them, taking the position that they have a constitutional right to run a blank vote campaign. According to their statement they “will continue to mobilize and promote this vote as a right and legitimate action.”

But while they may try to continue promoting their cause in the streets, all radio or television broadcasts supporting the campaign are now prohibited. From now until 14 April most voters in Huila will only be subjected to a single electoral campaign: that of Carlos Mauricio Iriarte Barrios. 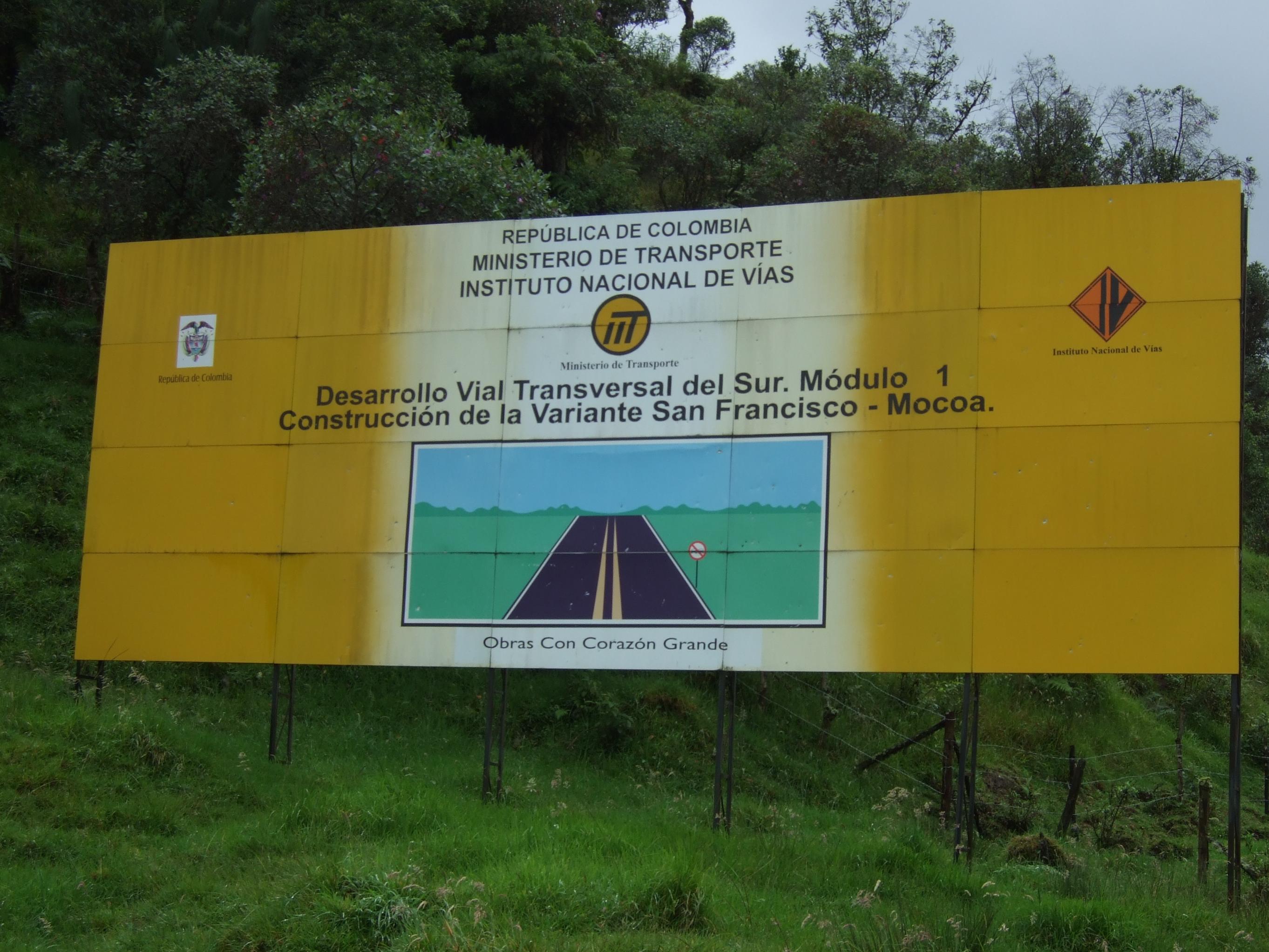 Lewisham Council plans to make a profit from renters: Besson Street and beyond