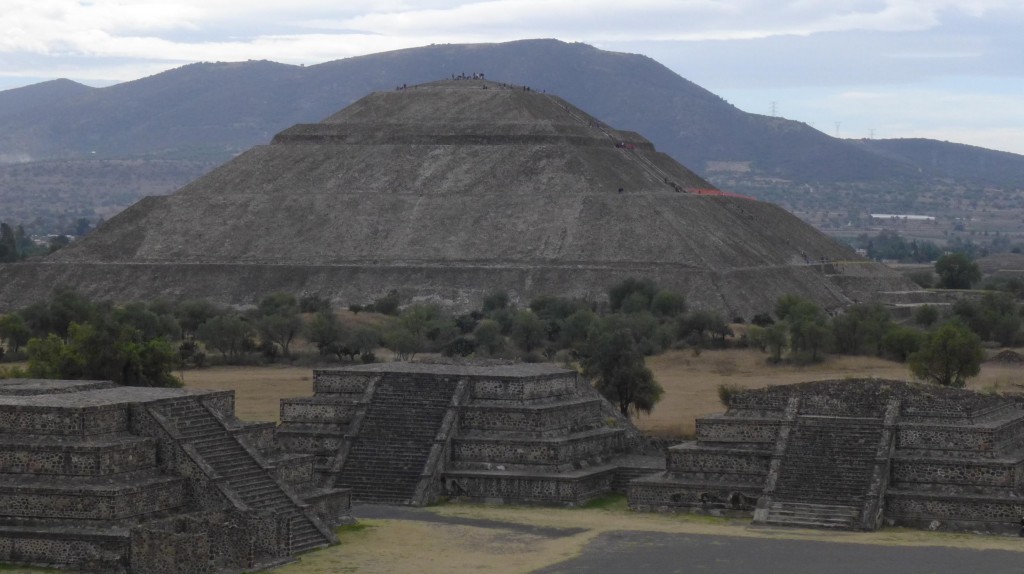 Last week I found myself, for the sake of a trip out of Mexico City, at some pre-Colombian pyramids. They were big. They were pointy. They dominated the surrounding landscape. Much exploitation must have been necessary to build them. A group of people who considered themselves more important than the others presumably got those others to build the pyramids for them, either through deception or force – likely a mix of both. What we might guess is that anyone who questioned their superiority would have encountered violence. The violence of elites is always suspicious. It happens when they know that their attempts to convince others of their superiority have failed.

I am not the first person to have questioned the value of pyramids. Indeed, I stayed for a few days among Mayan people recently. Some of them challenge the Western historical notions of the Mayan ‘Classical period’, when the greatest pyramids were built, followed by a long period of ‘decadence’ or decline of the Mayan civilisation. When the Europeans arrived the building of the last Mayan city, Mayapan, was 100 years in the past, and their greatest pyramids were 500 years old. The question is whether the failure to build great pyramids in that time signified a failure of civilisation. The pyramid is a very literal symbol of top-down hierarchy. Its arrangement of stones reflect the social structure necessary to build it. Perhaps the Mayans didn’t forget how to build pyramids, perhaps they decided it was a thing they didn’t want to do any more and they didn’t want to put up with the people who were trying to make them do it. Perhaps their progress involved getting over the stupid pyramid business and getting on with just, y’know, living.

When the Spanish arrived in the Americas they found it pretty easy to defeat the remaining ‘great’ kingdoms. All they had to do was decapitate them. But some people were organising themselves differently. The Mapuche, for example, and by that time the Mayans. Neither were so easily defeated. The Anthropology Museum in Mexico City remarks that Mayan peoples offered resistance to Europeans until the beginning of the twentieth century. That cut-off date must come as a surprise to the Zapatistas, a mostly indigenous Mayan-descended force that staged an armed uprising in 1994. But this is the same museum that speaks of pyramids as great achievements, so we already know they hold a particular point of view.

As far as the Zapatistas were concerned, their uprising continued 500 years of resistance since the Europeans arrived. In those 500 years they have also not built any great pyramids. The Zapatistas see themselves as heirs of the Mayan culture that existed when the Spanish arrived. They have therefore continued not building great pyramids through 1000 years, 500 of which have been under occupation. The Zapatistas are famously anti-hierarchical, which is not to say they do not have different levels to their self-governance, or that they do not have anyone in leadership roles. Historically some people have clearly taken leadership roles, and they have regional committees composed of representatives from each community. But they do not believe any person is inherently better than any other, and thus more deserving of power or a good quality of life. If you are sure of that, you need no pyramids. Some Zapatistas believe that their greatest achievement prior to the Spanish invasion was that they were no longer building great pyramids.

It is a political as much as historical point of view I suspect, and the mainstream theories of ecological decline probably have worth too. But it is typical of the mainstream ideas that they offer no agency to the indigenous people, particularly the ones who didn’t order pyramids to be built. I have no particular conclusion to these musings, but lest this post seem to be about matters long ago or far away, I feel compelled to point out what is obviously a temple for the priests of an enduring money cult: