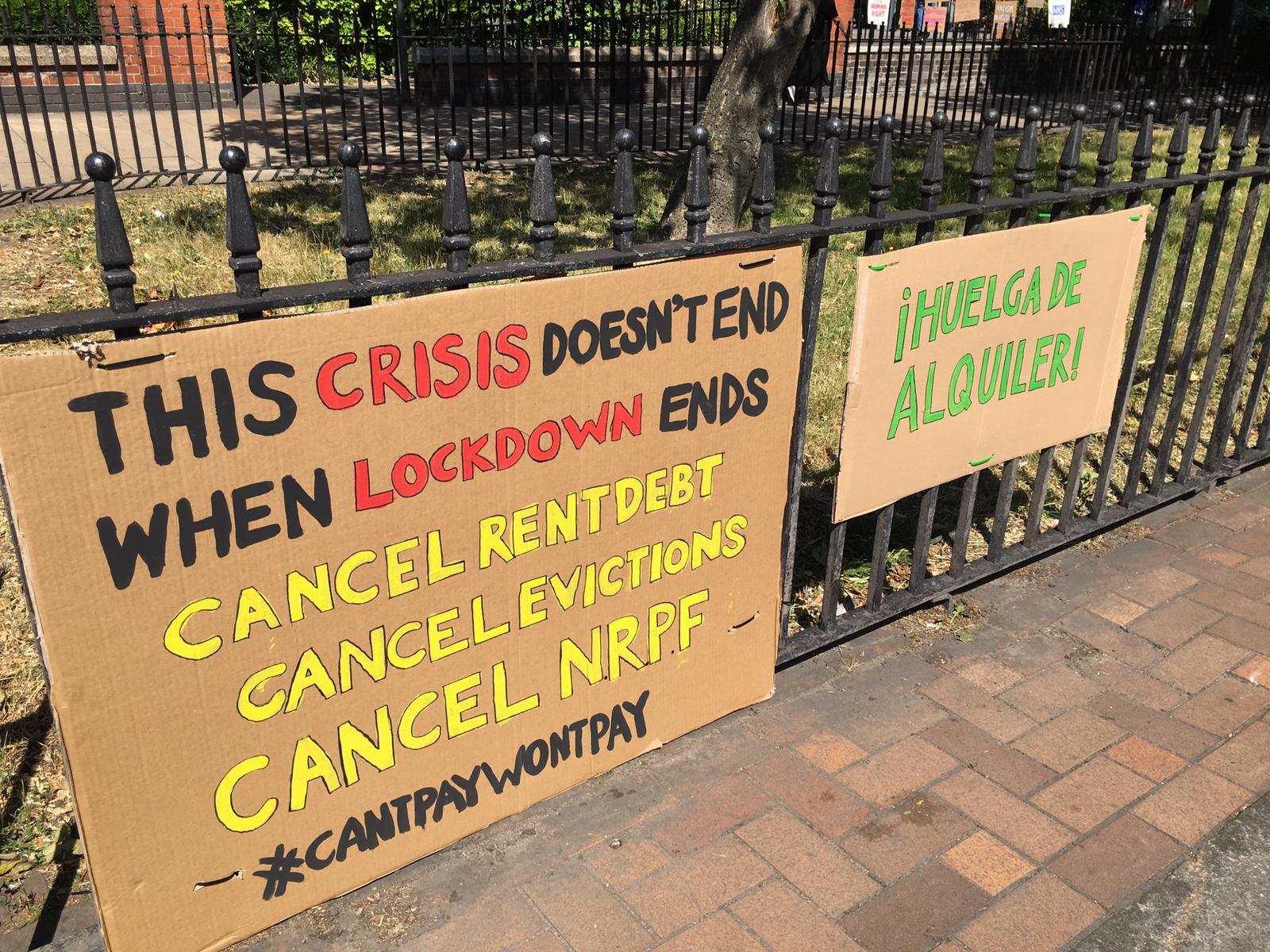 I’ve been talking to a wide variety of union members lately for my academic research and one of the conversations that I’ve fallen into with more precariously housed members – even when I haven’t brought it up – is how the union can do more to help members like them to be involved. Of course we already have some precariously housed members involved otherwise I wouldn’t be having this conversation, and that is much to LRU’s credit. However I think if we are honest with ourselves we know that we don’t have many such active members.

The question of how to recruit and maintain more such members is an important one for the union. I am not convinced that we are currently on course to recruit many such new members. We are instead on course to recruit a few more, growing that element of our membership very gradually, as we have done so far. This is even true, I think, if we involve ourselves further in block disputes with social housing and temporary accommodation tenants. So here are some proposals for changing this trajectory that have grown out of the interviews I’ve been doing in the union and the two block disputes I know a little about. Some of the proposals have come directly from some of our more precarious tenants and I’m just passing them on, others are my synthesis of what people have said.

Fewer or shorter meetings to be an active member

At the moment even coming to a branch meeting every month does not enable a member to feel fully a part of the union – a lot happens in planning teams, member solidarity teams and temporary sub-committee type meetings. A fair few people would like to feel properly involved but with fewer meetings. One way to do this would be to have branch meetings that are less polished (people have commented to me on a ‘performative’ element to LRU branch meetings), so that planning could be cut back to making an agenda on Whatsapp beforehand, and other elements of planning such as task distribution simply happen in the meeting. This could be seen as a ‘more boring’ part of the meeting, but it is also the inner workings of the union and more people could participate in it at a branch meeting than by going to a planning meeting.

One member made the interesting suggestion that even weekly meetings would be fine, but only if they were no more than one hour long. The advantages of this are that the member doesn’t have to block out a full evening for the meeting (as long as it is close to their home), and the prospect of bringing children or leaving them with someone else becomes easier. Or if the meeting is on Zoom, it is easier to keep children occupied for that period. I quite like the idea that we could have a cycle of planning meeting/member solidarity meeting/branch meeting/social meeting that would happen in a weekly slot in the same place. I think this would be much more accessible to all of our members, not just the more vulnerable renters.

As a final aside I’d say that while we have tried to make meetings more accessible by running them on Saturdays this is not always good for parents – their plans for keeping the children entertained or visiting family can be interrupted by Saturday meetings, making them less appealing.

Learning achievements that can look good on a CV

Learning is repeatedly cited by members as a key reward of being part of the union, but many of us in the union with a bit more privilege expect the learning to be its own reward. This is all well and good when you have a degree and thus potential access to millions of higher-paying jobs, but working class members with lower education levels and minimum wage jobs are of course more motivated by being able to improve their material situation. They too want to learn but several people have now said to me that they’d like to be able to work towards something to look good on their CV, whether that be a certificate in housing advice, or at least a statement of voluntary work done, or perhaps formally laying out skills they have gained in the union. Or something we haven’t thought of yet.

Doing things to look good on the CV is often not what primarily motivates more middle class radical organisers (though sometimes some of us do get paid work off the back of it), but I think it is worth the union having a long hard think about how substantive additions to a CV could materially benefit some of our members, and thus enable them to justify sacrificing precious free time to the union.

The union has sometimes had some reservations about trying to move members on the council’s waiting list upwards in the list, because it does mean someone else dropping down in the list, and there’s usually no action, just casework with forms and emails. It’s true that this is not systemic change work, but I think if we listen to our members on the housing list that they would love some help from the union in dealing with the Byzantine bureaucracy. “Why hasn’t the council offered me anything to bid on recently?” a couple of members have said to me helplessly, and I didn’t know the answer either. But for people in Temporary Accommodation and unaffordable private housing this is often the most important question: how can I get a council house? Housing Action Southwark and Lambeth have built a successful group with this as something of a speciality. So a challenge to LRU: on this issue are we listening to our members as we say we intend to?

Now council list bureaucracy does require building some quite specialised knowledge in order to be able to help people. I do wonder if we have the resources to do this in every branch through our usual member solidarity processes, where members are already learning a lot of housing law. Perhaps we could think about having a member solidarity staff member who specialises in helping members with housing list issues, possibly come into meetings on Zoom to give real-time advice when necessary. Or some other way of organising it that doesn’t add to the workload of members who are already doing a lot of casework.

For some members it’s difficult to come to meetings because they are doing shift work. Often they get offered their shifts at short notice and this can mean making a choice between coming to a meeting or getting paid. In this situation the union could offer to cover all or part of the shift. We probably can’t afford to cover 12 hour shifts, so maybe the compromise would be to offer, say, three hours worth of the member’s normal pay rate, since this is roughly the time it takes to attend a two hour meeting.

This could be seen as a tricky one. As a union where some staff are paid and most labour is unpaid, we’ve had a few debates over the years about who should or shouldn’t be getting paid for their contributions to the union. The reality is there isn’t a hard and fast line around it, except the line set by our limited budget and, to some degree, convention. We’ve not really been able to nail down ‘this definitely gets paid’ vs ‘this definitely doesn’t’ and we probably never will. But I don’t think that should hold us back from taking the action we need to get higher attendance at meetings from the people who need and want to be there. There are steps we could take even beyond paying people for missing shifts, such as paying people for being on the Coordinating Group, but this is a more complex proposition and would need careful thought.

If these proposals seem a little too radical, then consider the size of the problem we have to face: even many of our younger (childless), white, middle-class, able-bodied members become exhausted by the work they do in the union. Many have left already, burned out or aware enough of their bodies that they knew they would burn out if they stayed. So if our work is barely sustainable for these members, how can it be sustainable for those who aren’t childless, white, middle-class, able-bodied? Taking part in the union can exact quite a physical and mental toll. Some very well balanced people (Boo!!) are able to do exactly the level of work that they have the capacity for. A lot of us don’t manage that, and many of us don’t have caring responsibilities and physically exhausting jobs (Yes! We have bodies! They have limits!).

And then we can add to that the physical and mental effects of racialisation, debt, migrant status, gender, disability, contempt from bureuacratic bodies, and more personalised traumas. Intersectional thinking means being aware of how these add up in the bodies of our more precariously housed members, and calculating the real chances of many of them being able to be much more active in the union as it is. I think this is one reason why, while we have put a lot of staff time into developing the precarious renter members we have, this has not often led to the hoped-for chain reaction by which precariously housed leaders attract further members. I hope that some of the above changes could make such chain reactions more likely by reducing the costs and increasing the benefits of active membership.

Endnote: I don’t think this is the definitive list of things we can do to get more member involvement. I’d be interested to hear other idea, and we’ll all learn more as we go along. I’ll also just mention a couple of things from my previous research that could be helpful: Some people need more introduction to the union. What we do is more easily understandable to those who’ve been involved in activism before. For others we need to go slow, and personally I’d like to see the re-introduction of ‘Intro to the union’ side-meetings we used to do in Lewisham branch meetings. Beforehand we need to explain clearly what will happen in meetings, so that people know whether it is something they want to come to. We also need to make sure that there are always action points coming out of meetings, and things to get involved in, so that people know they didn’t waste their time by coming. I think some people come to our meetings and wonder where it’s all going. Let’s make sure they know.