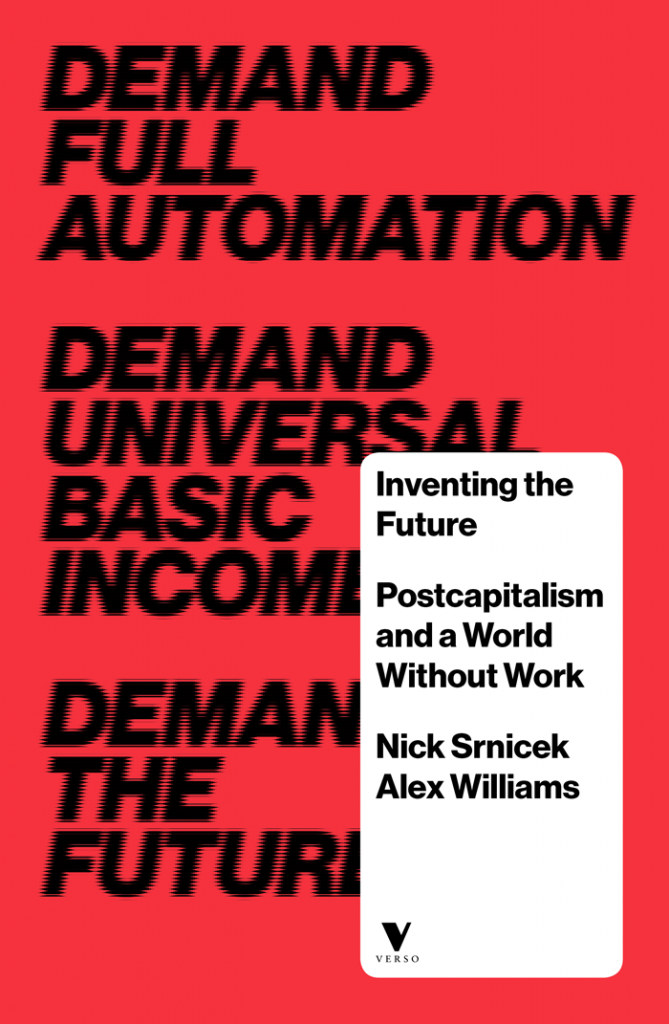 There was much that interested me in Nick Srnicek and Alex Williams’ Inventing the Future. The first part of the book constructs a critique of what they call ‘folk politics’. This they define as privileging the local, the small over the large, fetishising horizontalism and direct action, refusing to make demands, and a lack of strategic thinking about how to challenge the status quo.

Their criticisms of the radical left are harsh, but their idea of a powerless folk-politics has enough truth that I can, to some extent, let the harshness pass. I agree, for instance, that a politics without demands can’t lead very far. I agree that if we stick to pure horizontalism and consensus decision-making we’ll never build big enough alternatives to be able to challenge capitalism. I know that small local actions, however good people feel about them, will not in themselves change the system.

But Srnicek and Williams do not appear to accept any criticism of hierarchical organisations at all, and this is where I part from them. Before we get onto that, let’s look at their solution to the problems of withdrawal and lack of strategy they believe plagues much of the radical left.

They want to mobilise a populist movement against work, propagated through a counter-hegemonic constellation of organisations. I don’t know if the next populist movement will be against work – in the UK it seems more likely to be around housing – but I like the sound of it. Fighting against work, and for basic income, has many advantages, including that it would free up more time for people to organise their own lives.

This populist movement, the authors believe, will be built through a hegemonic project, in which we strategically re-shape ‘common sense’ through cultural interventions, existing organisations, and the building of aligned networks that can act at the institutional level as much as the street level. So we can construct an image of the future that people can believe in again, offering a better life than the status quo.

So far so good, but while I agree that in some situations it may be worth using existing organisations, the authors rather curiously avoid discussions of their structure at all. Why was it that anti-hierarchical critiques became so strong within the left, why was it that people reacted against the old unions and parties? Srnicek and Williams don’t seem to remember, or perhaps they never knew.

What, exactly, is the point in pouring your life’s efforts into an organisation that can betray its values with a click of Unison chief Dave Prentis’s fingers? What is the point in building a party from ground level when the likes of Blair can rise to power in a coup beyond your control? Do the authors truly have no notion of how thoroughly people have felt let down by every conventional hierarchical organisation? How harshly they have been screwed over? They talk about learning from the past, but this rather important part of the past is entirely ignored.

So the authors appear happy to construct their hegemonic project using, among other actors, existing unions and parties, and leaving them as thoroughly hierarchical organisations. They also don’t really present any alternative to the current forms of the state or corporations – at the end of a book we find a note to the effect that we can think about all this later, once we get our initial hegemonic successes. I too am not a total horizontalist, but I am in favour of limited hierarchy when it is fully bottom-up and properly federated. To offer a choice between full horizontalism and leaving organisations as they are is pretty bogus, but this is what they appear to do. My knowledge of organisations suggests that if movements are not built from the base and controlled by the base, they inevitably lose all radicalism. The more hierarchical they are, the more likely they are to fall captive to managerial elites.

To me it’s not clear whether the authors want to leave organisations as they are for now out of some imagined ‘pragmatism’, or because they have no critique of hierarchy at all. The effect is the same anyway, and has the curious result that it seems the authors think they can achieve a post-work world with and within existing institutions. I think that very unlikely indeed. In fact, it makes their whole hegemonic, populist project look like a pipe dream. If they can’t see how strongly existing institutions will resist a post-work culture, there must be some gaping holes in their left-wing reading lists. I feel fairly certain the institutions will have to be remade for such a thing to happen.

Throughout the book I found myself half agreeing with Srnicek and Williams. I agree that in recent years much of the radical left has been too withdrawn from battles with institutions, particularly governmental. Demands, I think, are necessary, if only to make your movement readable to outsiders. Small local actions, or spontaneous convergences like Occupy, will never be enough. But I think there is some important middle ground between their suggested programme, and the horizontalist ‘folk-politics’ they deplore.

What kind of masochist would commit to a movement that will make demands, build a power base, form strategy, declare victories, all using organisations they don’t truly control?