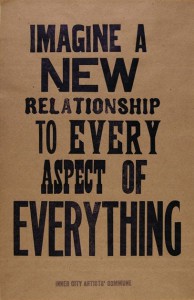 When I read Paul Mason’s Guardian teaser for his new book Postcapitalism, I had been mentally drafting a blog post entitled No One Solution, or something like it. Since it turns out Paul and I are in accord on quite a few things, I’m turning that unwritten post into a review of Mason’s article.

I agree with Mason that information technology is only just beginning to make itself felt on society, and is a radical technology that will continue to have social ramifications for decades, possibly centuries (climate permitting) to come.

I also like his comparison with the transition from feudalism to capitalism. Which brings me to No One Solution. No one idea or change carried society from feudalism to capitalism. It was a long process of incremental changes. Some of those increments were quite radical, to be sure (enclosures, limited liability as escape from networks of obligations), but it’s very hard to point to one moment and say: that was the moment capitalism started.

Left radicals keep proposing solutions to society’s problems, except they are rarely solutions plural, they are usually The Solution. We need The Revolution, we need The Class to emerge, we need The Crisis to end all crises, we need Money Abolished, we need Government Abolished, we need Everying In Common. Most of these solutions have been proposed for well over a hundred years and are either untested or were tested in such twisted forms that they might as well be untested. I am constantly puzzled by the certainty with which people think their One Solution is right. That certainty often comes from a conviction that the person has the right model of society, that they know how it works. I can’t help seeing that as a bit deluded.

Back to Paul Mason. He sees a shift coming in the way we think and behave and organise ourselves economically. This isn’t about One Solution. It’s a process of change. Where perhaps he fails is in pointing out how long this might take – the transition from feudalism to capitalism took several hundred years. It feels discouraging to point this out – people want solutions now, because people are suffering now – but I think it’s necessary to accept the timescale we need to think in, even if it’s less sexy than Revolution Tomorrow. Our solutions must alleviate suffering now wherever possible, but must also think a hundred years into the future.

Incrementalism is often associated with very pragmatic people, liberal gradualists or less conservative conservatives. I’m an idealist, I am interested in radical change, but I don’t think there is One Solution. I think we need to work out solutions – plural – as we go along, to problems that arise, using technologies as they become available. This doesn’t mean never taking an over-arching strategic view; some solutions will come from taking exactly that view. But it does mean avoiding a simple narrative with a happy ending created by our One Solution. History isn’t a Hollywood movie.

Paul Mason, I think, gets this: “The design of the postcapitalist world, as with software, can be modular. Different people can work on it in different places, at different speeds, with relative autonomy from each other.” But what he brushes over in his article (and the book may well rectify this) is that anyone who wants to see a post-capitalist future is going to have to fight, and fight hard. There is nothing inevitable about these new technologies liberating us. Think how machines could have freed up our spare time, and how thoroughly they failed to do so. The new technologies are, as Mason points out, already being captured by the likes of Google and Facebook. It could be that their models are doomed, as Mason wants to believe, but it seems to me this is by no means inevitable.

Mason admits at the end of his article that we need to take action to harness the new technologies in the favour of the many rather than the few. But he speaks as though this is simply giving society a nudge in the direction it already wants to go. Some notion of the inevitable course of history seems to remain in Mason from his Marxist roots. But you can be a materialist without thinking you have enought knowledge to make predictions. I think it’s important that we understand there is nothing inevitably about new technologies working for us. We have a tough fight on our hands. At times it will be grim, at times it will be fun. We will try many things and fail, those advocating different solutions will struggle to work together, we will be confused, often. Sometimes we won’t even be sure whether a given solution is good or bad over the long term.

But that’s history for you. It’s like life: you only get one shot at it, and the trial and error often feels mostly like error. But we need to accept this. There is no One Solution, there are many, and they don’t all go in the same direction. It’s complicated, and we will struggle to make technology and information work for us. But I am in agreement with Paul Mason that this technology, and the struggle around it, offers a lot of hope. It is easier to produce things together than it ever was, information is more freely available than it ever was, it is easier to organise (logistically if  not socially) than it ever was. In these dark days of neo-liberalism triumphant we actually have a lot going for us, a lot to look forward to. It would be a shame if the incremental, sometimes radical, gains we can make against the status quo were to be downplayed because they aren’t the One Solution.