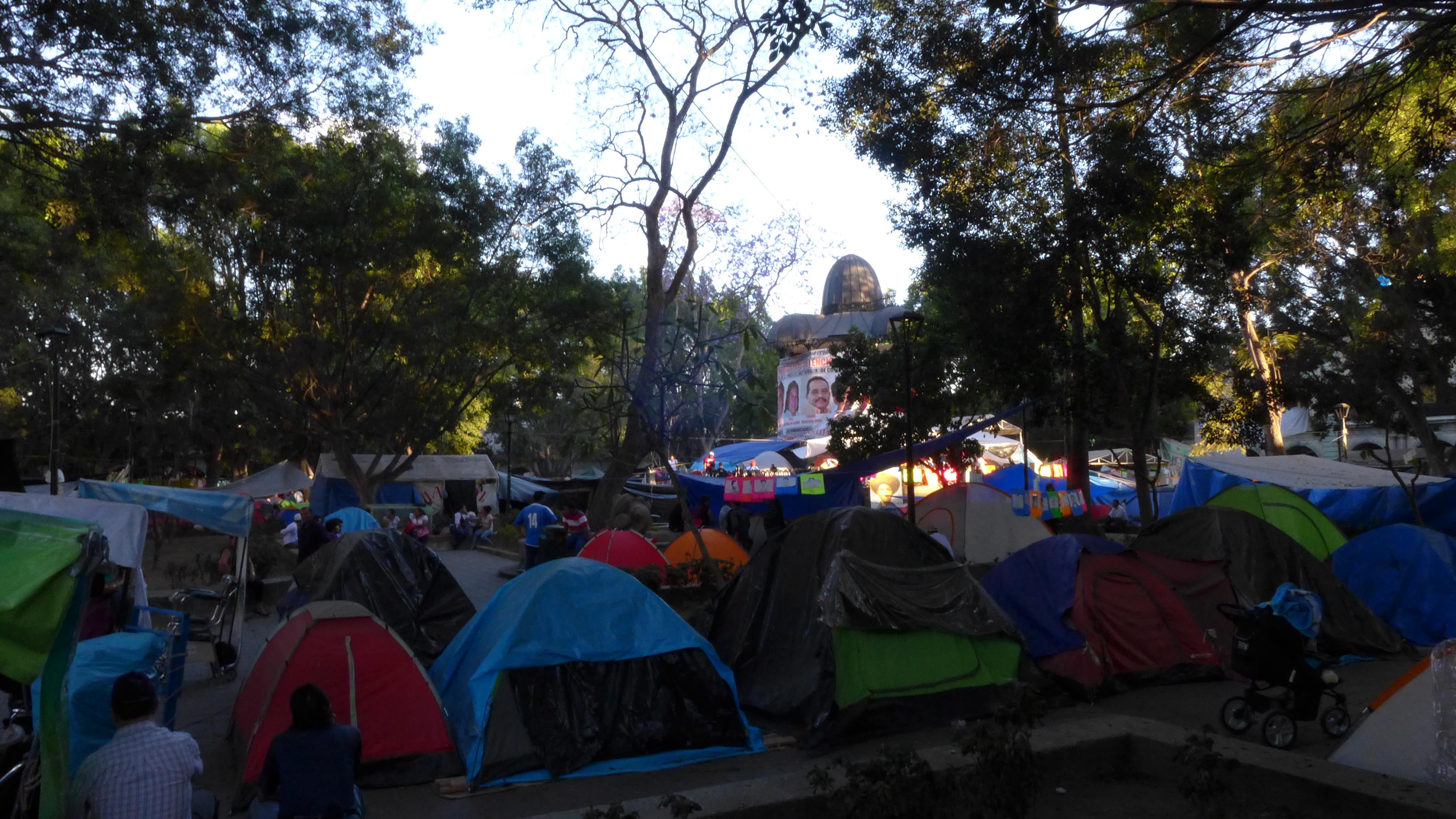 The city of Oaxaca has sunny weather, a beautiful colonial centre, and arguably the best food in Mexico. It is not, on the face of it, the type of place to forment political unrest. But in the main square of the city the first thing you see is a camp surrounded by political slogans. It is important to know that the centre of the city is not representative of the state of Oaxaca, of which it is the capital. To give you an idea of the level of poverty in the state, a few years ago it was estimated that 35% of the state’s residents lived in houses with earth floors. Perhaps because of this the state has been very politically active in the recent past, including something of an uprising a few years ago in response to state repression of protest.

Perhaps my favourite fact about Oaxaca is that the current president of Mexico has been unable to pay a visit to the city during his time in office. If he tries to plan such a visit, the well-coordinated left wing organisations threaten to blockade the airport and every road in and out of the city. It’s not an idle threat, so the president stays away.

As for the camp in the main plaza: it has been there for a whole year, with only a short break for Christmas. It is a camp of striking teachers from across the state who are opposed to the education reforms passed by the Mexican government. They consider the reforms to be regressive, conservative and imposed in a top-down way by the central state, without taking communities into consideration. A group of self-organised teachers have presented alternative education reforms based on what communities need. The camp is now also about the political prisoners who are the casualties of state repression of the strike.

The level of organisation behind the camp is impressive. Each week the teachers of one region of the state take a turn at occupying the camp. They then return back to their area until their turn comes round again. In this way they can occupy the camp constantly without burning out. It currently shows no sign of coming to an end.

The teachers’ tactics, which have also included invading ruling party offices and blockading roads, are not universally loved in the city. One man told me the teachers have been striking every year for forty years now. I was all ready to be impressed but it turned out this wasn’t true, just a sign of the man’s disgruntlement. A bar owner told me he wasn’t happy that their blockades mean falling tourist revenue. He thought that the real winners from the protests were its leaders, who grow rich (though it’s not clear how) during the protests.

But apart from those directly affected by the protest tactics, there seems to be a high level of support for the teachers and many of the market stalls around the plaza also carry signs with their political slogans. One year on the central government shows no sign of weakening in its plans but the Oaxaca state government has been forced to consider alternate education reforms. If that doesn’t work, the current president won’t be there forever, and the teachers have their eye on the long term.