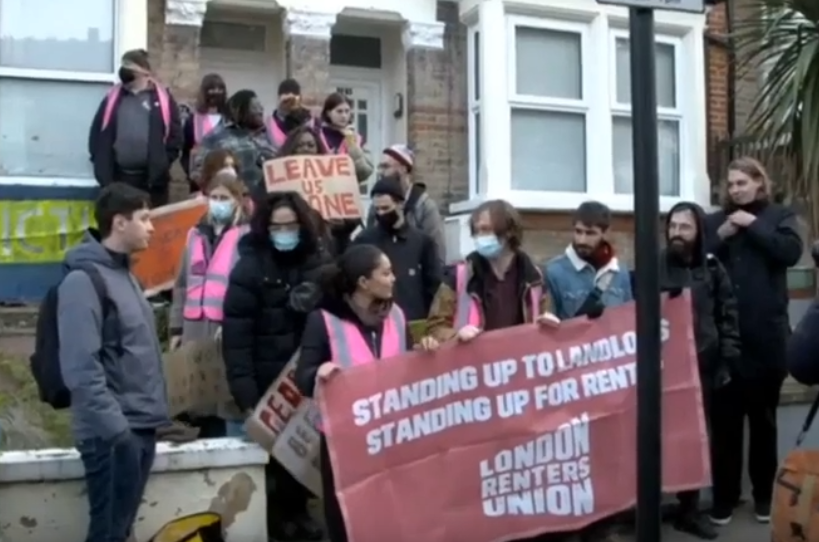 London Renters Union, seeing itself as a radical organisation drawing on radical traditions, refers to a ‘right to housing’ seldom, bordering on never – at least in its formal literatures and trainings. Yet as this news clip featuring the union demonstrates, the idea of a right to housing does come up in the union’s street actions, in this case an eviction resistance:

This is not an isolated incident. Any time people get on a microphone at LRU actions the idea of rights is likely to come up. The chant ‘Here to stay, here to fight, housing is a human right’ is a perennial one.

I believe the union chooses not to talk about rights in most of its political conversations because it considers the more radical stance to be talking about power – and the landscape of power does also come up very quickly after the rights talks in the above video. What we as renters can win for ourselves, says the union, is about how much power we have, while ‘rights’ often seems to refer to a higher authority, deferring to their power rather than ours.

Why then does this rights talk appear on the streets? One reason is perhaps the persistance of ‘folk’ ways of thinking about politics. There is a long tradition in protest politics, going right back to the Peasants’ Revolt, of appealing to the idea of rights. Think of almost any protest you might go on and the topic of the protest is likely to be talked about in terms of rights – often without much reflection on it – whether that be the rights of Palestinians, the rights of LGBTQI people, or the rights of taxpayers.

While some do think of rights talk as being insufficiently radical, historically I think it would be a mistake to assume that a particular instance is not radical without further examination. There are plenty of examples of radical movements that talked in terms of equal rights. But there is for sure a more-radical and less-radical version of rights. In the non-radical version the ‘right’ is granted by an institution, usually state-level or higher, often in response to a request. You might end up in court to defend such a right, and in many instances the established norm is a thin, pale version of what had been asked for.

This is a type of right that often emerged from the more radical version of rights: people simply claimed rights for themselves. In doing so they set themselves up as the higher authority (we might talk about ‘constituent power’ if we wanted to talk in technical language). Implicitly protesters are saying that we can claim rights for ourselves and grant them to ourselves. There is no need to request the right of a higher authority in a conventional sense (the state), although there may be some pragmatic value in institutionalising the claimed right at some point. Ideas as basic as the right to vote were created by people who, as collectives of less powerful people in society, simply decided together that they wanted and needed a right to vote. That is not a history to be sneered at, so I don’t mind that rights talk suddenly appears, in slight defiance of LRU’s formally stated politics, in protest situations.

But I have wondered if there is a little more to its appearance in action spaces than mere tradition. At an action such as an eviction resistance the participants can feel very exposed. You are usually outdoors, occupying a public space that is largely indifferent or occasionally hostile to you. The hostility of landlords, estate agents and bailiffs is absolutely assured. You have arrived in enough numbers to give you a little confidence but not always in very great numbers. You are still a small, exposed group in a huge city that has little time for you. Isn’t it understandable if in this situation we might, probably unconsciously, invoke a higher power? It’s not just us, we’re saying, it’s something bigger than us that we are representing.

Again, for LRU that higher authority that grants rights is rarely a government authority. While technically in the UK there is a right to be housed by local authorities, the way this duty is interpreted leaves many out in the cold or in unsuitable accommodation, so this is a right rarely evoked by activists except in the specific circumstances of a homelessness application. No, it seems that implicitly the higher authority – the granter of rights – is some idea of ‘the people’. While there is no doubt always a slightly imaginary element to such constructs, within an organisation like LRU it also comes from talking endlessly to people in our recruitment drives, as well as to our own members, and knowing that in fact vast numbers of people do believe there should be a right to housing.

As we confront the harshness of bailiffs or estate agents then, we’re telling a story about how what our opponents see before them is merely the tip of the iceberg. There may even be an implied threat that there are more of us than of them, promising a future in which we call the shots. I think we tell the story in that moment and space in part because we feel justifiably vulnerable. We want to remind ourselves that in fact our small group is not alone in the big city. No landlord was ever scared off by the claim of a right to housing, but I think many a heart has been warmed by it whilst occupying an exposed position.