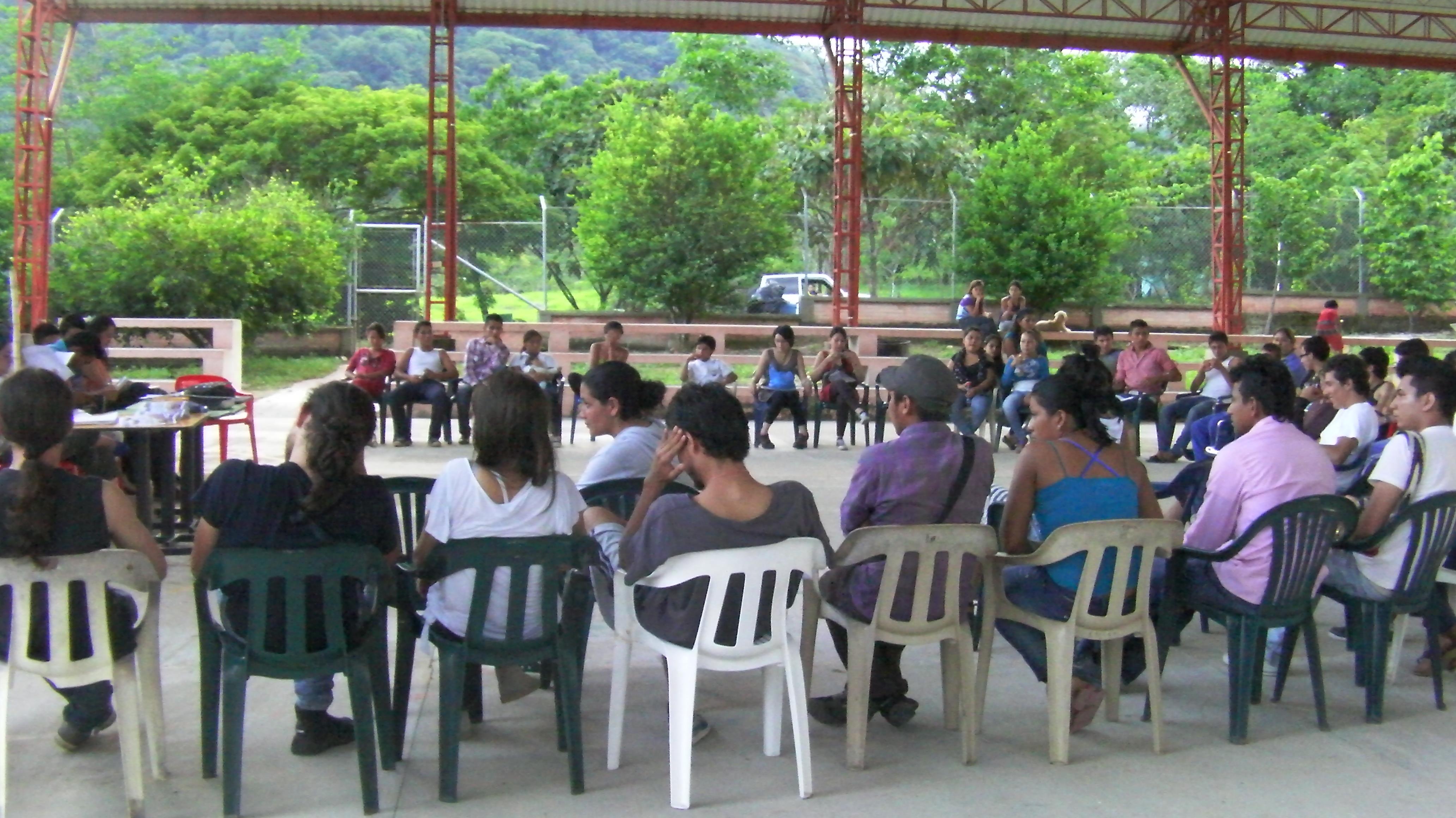 As night falls over a meeting of student and youth organisations in eastern Colombia, the shadows over the peace process between the government and guerrilla groups become eerily literal. We are in a village in Casanare department, in the east of Colombia, far from the nearest mobile phone signal. As darkness closes in around us, two groups of lights can be seen on the hills above the village: on one side the lights of a military base cast shadows down the hillside, on the other, the flame burning off excess gas from an oil well.

I met some of the participants in this meeting at a ‘Congress for Peace’ in Bogotá, organised by a network of left-wing groups emerging blinking into the uncertain light of President Santos’ peace talks with the FARC and lately ELN guerrillas. To understand why this peace process seems risky to many Colombians it is important to understand some history behind it.

The voters of Colombia currently get to choose largely between right wing parties and what are known here as ultra-rightists or the extreme right, currently headed by Colombia’s former president Alvaro Uribe. Part of the reason for this lack of left wing options – despite millions of potential left wing voters – can be seen in the policies of Uribe. Deciding in the early years of the millennium that he would push back the left wing guerrillas by any means necessary, and bolstered by billions of dollars from the US government, he increased the size of the army and supported the creation of a vast network of right wing paramilitary groups.

The paramilitaries did fight the FARC and other guerrilla groups, and many urban Colombians were pleased they pushed the FARC back, but that was not all that they did. Anyone who organised themselves to defend their human or economic rights, whether as indigenous groups, trade unionists, campesinos, or environmentalists, found themselves labelled as ‘guerrillas’ and at risk of execution, rape, and torture. While waging this war against the left, the paramilitaries were forcibly displacing people from their land in order to steal it for rich business interests. Colombia’s military and paramilitaries executed thousands of unarmed people without trial and piled their bodies into mass graves or threw them into rivers. Extreme violence, some targeted, some more arbitrary, is what it took to keep Colombia out of the leftward movement evident in much of the continent over the last decade.

Eventually a ‘false positives scandal’ came to light: it turned out that soldiers had rounded up and executed over 3000 young men from poor areas and presented them as dead guerrillas in order to claim financial rewards. Yet this was only the tip of the iceberg: areas of rural Colombia – including this village in Casanare – were turned into a living hell by the rule of murderous paramilitaries assisted by the military. The FARC guerrillas were indeed beaten back and entered the peace talks from a position of military weakness. But the price of Uribe’s victory was very high indeed for rural Colombians. Colombia currently has the highest number of internally displaced people in the world – an estimated five million people.

After a high-profile attempted ‘demobilisation’ of the paramilitaries that took out key leaders but left the groups fragmented but intact, many of the re-organised groups turned drug trafficking into their core business. It was a natural move for illegal armed groups who, as collaborators with the state, are often allowed to go unsearched through military and police checkpoints. Yet the groups still maintain their right wing ideologies and some rural areas of Colombia and many poor city barrios are still under the grip of paramilitaries (now called Criminal Gangs by the government), one moment drug-runners, the next, right wing assassins.

But Uribe’s ‘Democratic Security’ policy was not the start of the persecution of unarmed leftists in Colombia. The nadir of this campaign, the event that reverberates in people’s minds as the peace talks progress in Havana, was the wiping out of the Unión Patriótica. This political party was a mixture of demobilized guerrillas and civilian leftists that grew out of a previous failed peace process. Between the late 80s and early 90s, somewhere between 2000 and 5000 members of the Unión Patriótica are thought to have been murdered, some by paramilitaries, some by drug gangs, some by the military, but according to most external analyses of the killings, they were murdered with the compliance or complicity of the Colombian state. Some cases have been decided against the Colombian state in the Inter-American Court of Human Rights while other decisions are pending. A Colombian court recently ruled the extermination of the Unión Patriótica to be a case of ‘political genocide’.

So here is Colombia’s dirty secret, open to anyone who cares to know: that the Colombian elite have fought a long and bloody war not just against the armed insurgency but also against the unarmed left. So comprehensive and successful has been this war that when we follow its history, and see the consequent strength of the right within the Congress, it casts Colombia’s claim to be a democracy into serious doubt. Some of the young people at this meeting tell me their parents have warned them not to express left wing views in public. This is not simply paranoia: Colombia has seen more forced disappearances than any country in Latin America, outstripping even Argentina’s Dirty War.

A repeat of the Unión Patriótica years is what Colombian leftists fear most as they re-emerge into the open. But emerge they must, because if the exclusion of the left from legitimate politics in Colombia has been a result of the armed conflict, it was also one of the roots of the conflict. It should be said that the left has not entirely disappeared in Colombian politics: there are some minor parties, notably Polo Democratico Alternativo; many campaigners established NGOs in order to distance themselves from the direct political arena; the ever-growing list of assassinated trade unionists attests to their continued existence, and Bogotá has a besieged left-wing mayor, Gustavo Petro, a former guerrilla now leading his own party, Movimiento Progresistas. But this adds up to very little influence nationally, and unless the left gets more influence in Colombian politics, the guerrilla splinter groups the peace process will undoubtedly leave behind will only grow again. A successful peace process has to mean the re-emergence of the left as an influential and legitimate force in Colombian politics.

This leads us to the problems facing President Santos in making the peace process work. His reasons for starting the politically risky peace process in his first term – many people had expected him to wait for his second term when he wouldn’t have to worry about re-election – are not clear and subject to some discussion, certainly among the left. Possible answers include: that Santos believes in peace for the good of the country, that he understands the guerrillas can never quite be beaten, that he thought it wise to negotiate when the FARC were militarily at a low point, that it polled well (74 per cent of Colombians wanted peace talks in one survey), that he thought it would be good for the economy, or that he needed something big to differentiate himself from Uribe before the next election and had no intention of actually changing economic policy. Quite possibly the real answer includes all of the above.

But whatever his intentions Santos springs from Colombia’s business elite and has to keep them happy or risk a media war against him. What has kept the Colombian elite happy for decades is the exclusion of most of the left from politics. He also has to keep the military happy, and what has kept the military happy is being able to grow fat on money given them to fight the FARC. The top military brass are also of the elite, are politically right wing, and they don’t want to see the left grow strong in Colombia. Apart from anything else, while they are keen to see the FARC pay for their crimes and human rights abuses, they are not keen to pay for their own. Nor are the third of Colombia’s congress – mostly supporters of Uribe – currently under investigation for links to paramilitaries.

Yet Santos must allow the left into politics or the peace process will fail, and whatever Santos’s faults – which include being Minister of Defence under Uribe during the ‘false positives’ murders and paramilitary-aided massacres – he has bet the next election on the peace process and he has to make it work. It is an unenviable balancing act, and success is so important that some of the Colombian left have found themselves in the strange position of supporting this right wing president in making it happen.