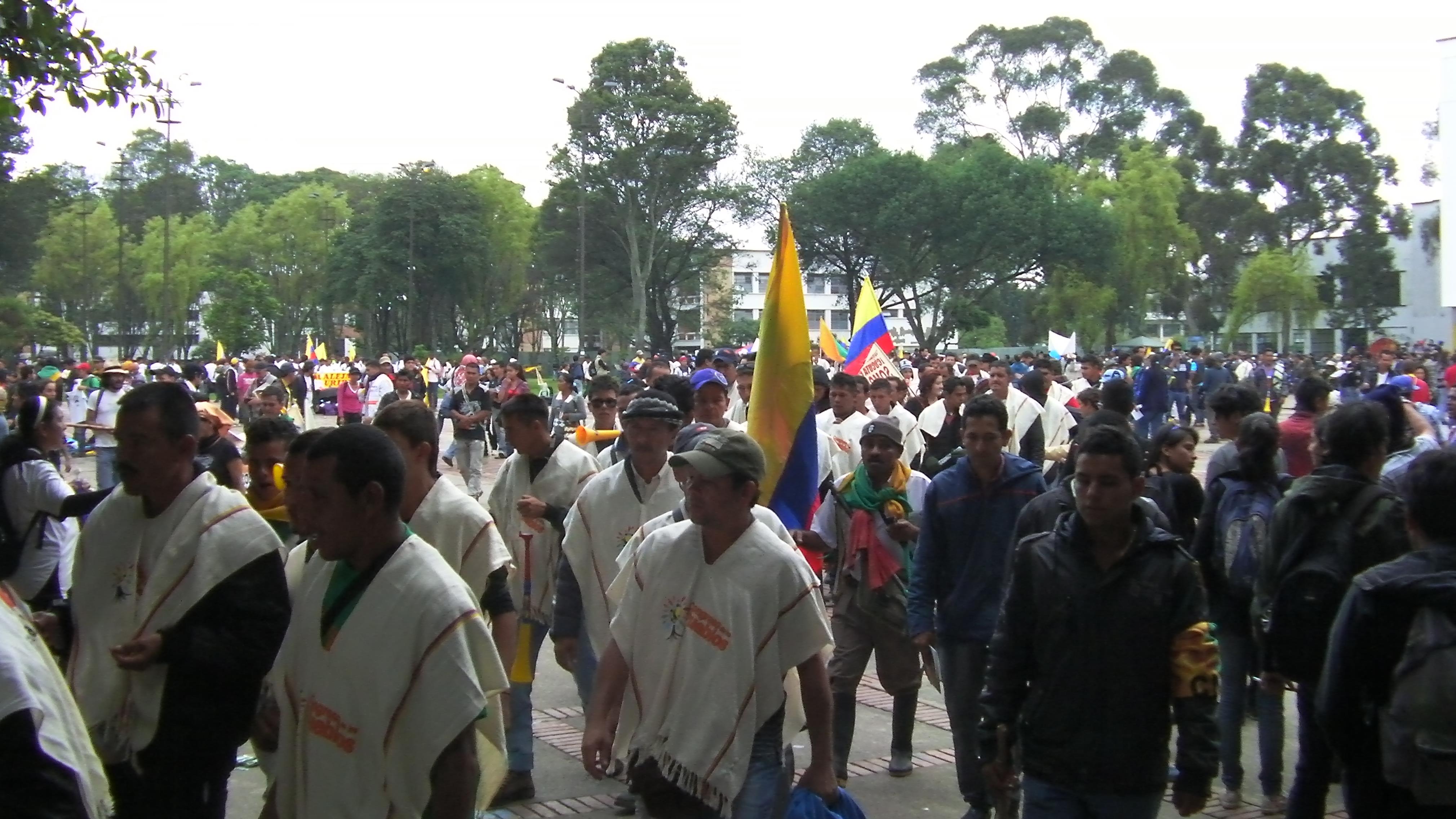 So who are the re-emerging Colombian left? I met my companions in this small Casanare village at a meeting in Bogotá organized by the group ‘Congreso de los Pueblos’, or People’s Congress. That meeting attracted 15,000 attendees from all over Colombia, mostly from rural areas, many campesinos and indigenous people, but also students groups, women’s groups and other constituencies. The Congreso is the smaller of the two main networks of leftist organisations currently emerging. The other network recently attracted up to a million people to a March for Peace in Bogotá. Their name, almost seeming to tempt fate, is Marcha Patriótica.

Politically speaking Marcha Patriotica favours rather hierarchical organisation while Congreso de Los Pueblos wants to see progress pushed more by political movement from below. However neither organisation is characterized by ideological coherence, except perhaps in opposing the neoliberal economic model. Some organisations join one or other of the networks simply because it is strong in their region. In general the Marxist currents in Colombia have maintained a popular base by defending campesinos and rural cultures against the exploitation and indifference of city dwellers. But to the Colombian elite the reasons people align with these leftist groupings mean little: both of these big networks are socialist and are viscerally hated under the same heading as the FARC, Hugo Chavez and Fidel Castro.

Of course it is not just hatred of the left that poses a threat, nor even the political strength of the military. The other light casting shadows over the village tonight is the flame of the oil well. It is economic interests that drive the Colombian right wing, and notably at the moment that means oil and minerals. Analysis shows that multinational oil and mining companies in Colombia pay paltry sums of money in tax and revenues compared to those paid in the neighbouring countries. It doesn’t matter to the Colombian elite: they benefit from the extractive industries through subcontracting and other links with the companies. But it matters to the left, who want revenues in order to try and reduce the inequality that plagues the country. Harnessing and controlling the extractive industries will be number one on the list of things to do if the left ever get any power in Colombia.

The history of the particular oil well above the village in which we are sitting can tell us something about how badly this could go wrong. The oil well was previously owned by BP, and this village has a communal hut built by the munificence of BP’s Corporate Social Responsibility programs. But local people have little reason to love the oil company: BP appears to have benefitted from the operations of the local paramilitaries who ended up guarding their pipeline. Around 1000 people were displaced from their homes by threats of violence and BP has since paid compensation, though it has not admitted liability. BP was also paying the local military brigade, implicated in numerous human rights abuses in the area, to guard their installations. Since this latter system of payments occurred legally under a ‘democratic’ government no crime is considered to have been committed.

BP has since left Colombia but other multinationals have arrived, most notably oil company Pacific Rubiales and gold miner AngloGold Ashanti. The multinational gold-miner has concessions throughout the country and is developing several projects, with more in the pipeline. The spoils of this game are not small: AngloGold’s project La Colosa may one day be the biggest gold mine in South America. Neither these multinationals, nor their subcontractors and other allies in Colombia’s elite, want to see the projects threatened by increased environmental controls or higher revenues. The extractive industries have become a stake in the game of Colombian politics, a game that the elite as well as the guerrillas often play very violently indeed.

Meanwhile the patron of recent paramilitarism, Alvaro Uribe, is waiting in the wings, now turned against his former ally President Santos and eager to re-establish a policy of security above all, with the peace process as only one of the potential casualties. He currently cannot run for a third presidential term but constitutions can be changed or he could put a friend in power. Many of his paramilitary-linked friends still sit in Congress and a new party of ultra-rightists called the Centro Democratico is forming around Uribe with the intention of challenging Santos. It is highly likely that a failed peace process would swing the media and the country back towards these waiting ultra-rightists.

If Uribe or his friends return to power, or if the military asserts itself, it is likely that many people involved in the re-emergent left, perhaps including some of the young people I am sat with tonight discussing the impact of multinational companies in rural Colombia, will be murdered. They will be labelled as guerrillas and taken away in the night or shot in the head by a man on a motorcycle, and no one, least of all the police, will investigate. Colombia’s history makes such repression not only possible but probable.

Under Santos the money flowing from Europe and North America to human rights defenders in Colombia has begun to ebb. Without Uribe in the presidency the cause of human rights in Colombia seems less pressing. But it is possible the NGOs are withdrawing at the worst possible moment. If the peace process fails, the ensuing violence could be as terrible as anything Colombia has ever seen.

But perhaps, after all, a stronger NGO presence wouldn’t make much difference. Perhaps, as before, we will hear rumours of blood and death, and the Colombian elite will murmur about ‘terrorists’, and the world will shrug its shoulders for a country they know by reputation to be violent, but whose violence they do not understand. Our multinationals will continue to take out oil and coal and gold, and world leaders will continue to refer to Colombia as a democracy. So it has been for decades. So it may well continue to be if the peace process fails. The axe will fall once more, to once more extinguish the threat to the Colombian status quo, to once more fill unmarked graves in the countryside.

If that happens, I certainly won’t shrug when I think of the young people in this village in Casanare. The question of whether international observers would accept the demonisation of the unarmed left is still open. The fact that Uribe is still considered a respectable international statesman despite the mass graves his rule left behind is not promising.

Whether we agree with the socialist ideals of these young people or not, we should admit they have a right to peacefully and democratically express their desires. Perhaps we could even admire the risks they are taking in stepping forward right now, with such a dark history weighing upon them. They are here knowing that the peace process might fail and what that might mean. Let us hope they get the peace they so desperately need and, if the worst happens, let us not be silent.

Paramilitaries’ Heirs  The New Face of Violence in Colombia
The “Sixth Division”  Military-paramilitary Ties and U.S. Policy in Colombia
IACHR CONDEMNS MURDER OF HUMAN RIGHTS DEFENDER AND MEMBER OF THE UNION PATRIOTICA AND HIS BODYGUARD IN THE REPUBLIC OF COLOMBIA
Preventing a repeat of a political genocide
Brutish Petroleum in Colombia
BP pays out millions to Colombian farmers
Giving It Away: The Consequences of an Unsustainable Mining Policy in Colombia